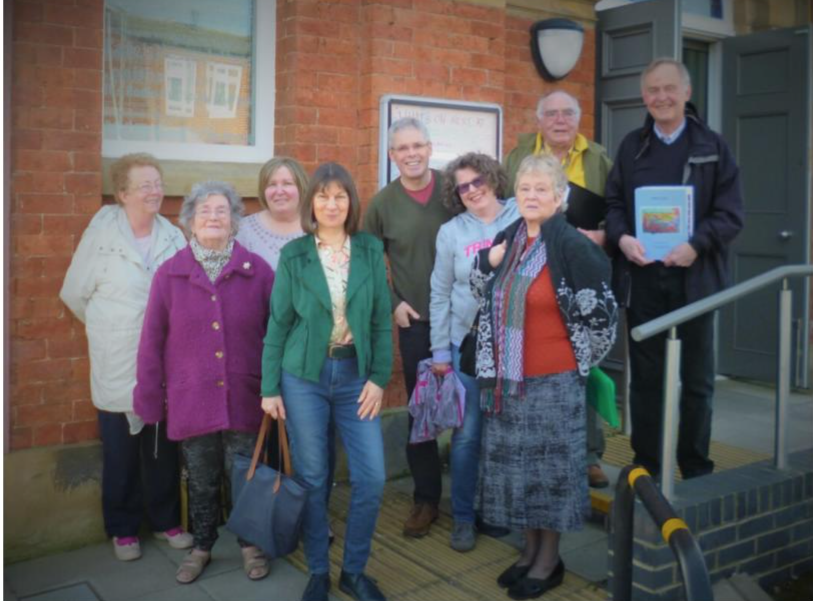 Voices in the Coalshed: My Wife Knitting

It’s been an exciting month for Voices in the Coalshed, with us not only celebrating Haiku Day (catch up here!), but we also welcomed Agbrigg Writers for our first community group contribution! Inspired by Norman Cornish’s painting ‘Portrait of the Artist’s wife, Sarah, Knitting’, whet your appetite by listening to this piece by Sharyn Owen, which imagines exploring the painting through the eyes of the painter. You can also read and reflect on this piece and the six other contributions from the group below, inspired by the same painting.

The hand that winds the wool round the needle’s shaft,

The hand that works the stitches one by one,

Knits up the coughing nightmares in stoical silence,

Trapping dark fears like bread in a snap tin.

The hand that holds the knitting on her lap,

Props up the mine with every twist of her wrist,

Every meal on the table, every scrub of the step.

The brush that paints the hand that holds the miner,

When in suffocating darkness, there was always a lamp.

Click. Click. Click. His eyelids drooped. A result of hypnotic tapping and the mesmerising flames. He marvelled at the concentration on his wife’s face. He pushed his chair back a foot, away from the sweltering heat. His clumsy, blackened hands knew nothing of knitting, but he knew a lot about coal.  He ripped the stuff out of the ground, he and his team.

Digging. Like a colony of ants excavating, or moles burrowing, large mounds above them a testament to their labours. The dust got everywhere. In the sandwiches, up their noses, in the lungs. It’s in the blood. No amount of steamy water and gritty carbolic would wash it away.

I married into a mining family. My husband worked at the pit as did his three brothers, his dad, both grandads, two great grandads and a great, great grandad.

Miners provided their own clothes and the women washed them at home.  Later the NCB did provide workwear and they laundered the outer clothes but the underwear and socks were still washed at home.  I don’t miss that!

Depending on how many menfolk you had at the pit, women could be making a dinner two or three times a day, according to their shifts.

Mining was not a well-paid job and women were inventive.  For example, rugs could be made from old clothes.  My husband’s aunty used to get old jumpers and unravel them.  She would then knit them into thick, warm pit socks.

Many women were as supportive as pit props.

I married a miner from Spennymoor.

He broke himself hacking out the black stuff.

He took a risk and became a painter.

He told me to sit still

I have a crick in my neck.

Lowry advised him to paint what he knew.

He filled notebooks with details of beer glasses,

that swept out the dust cancers of the mine.

He sketched the men with bent backs and coughing lungs

Now it is my turn.

He loves me well,

hunched over my hands

She sits there, knitting all her love and fears for her man into some article of clothing. Maybe it’s a thick undervest or perhaps something he can wear with pride at weekends when they are reunited above the surface.

She’s bent over the garment not in submission but in pride, as the comfort-giver and provider for the family. She’s his steady rock in the stormy sea imagined in the background.

That’s the burden she has to bear, trying to keep calm and clearheaded both for his sake and for the bairns’ sake. They’ll need her even more if anything happens to him.

Maybe she symbolizes all the pit wives, bearing on her shoulders the fragile lives of their husbands and sons down the pit.

Or just thinking about the joy her task will bring to its wearer. In turn he is expressing his love and admiration for her.

I hate it when he’s on nights, ever since the lads woke me up regarding the accident… knitting’s a great way of filtering the mind but it doesn’t remove the dread. My risk thermostat works overtime…

The belt swung! Hit him on the temple! Hospitalised, unconscious!

Left me feeling fragile…Left him an indigo tattoo he calls his trophy.

If I cast on this sleeve now, he can wear this cardigan on Saturday at the Miner’s Welfare harvest do…

Meanwhile, above the shaft, free of insidious black, his first call is   breathing the sweet air of the allotment, where he administers to my rival.

I badger him about it being the kids, dog, and that bloody marrow, coming before me. He just winks! A man of deeds not many words!

However, when we trundle home on Saturday, 1st Prize glowing in the wheelbarrow…….

What did you do down the mine Great Grandad?

Harvested the jungle, the Carboniferous.

Hot down there was it?

Why did it die?

Same today. They told us in school.

It’s just natural decay, and as your Granny would say:

Ask her, she’ll tell you how it is and was.

TISWAS! She told me about that too.

Today Is Saturday: Watch And Smile

Said she watched it from ‘74 when it started

And re-runs in the strike in ‘84 to steel her resolve.

Nay, I really couldn’t say…could I?

My Wife Knitting by Norman Cornish

She is always one step ahead of me.

All I can do is dig out coal, ride the paddy mail to the showers,

She knits the bones of our family together,

stitches our wounds, tacks the seam of every day

with deep knowledge of the shape our lives should be.

Angular as a gallery of half-drilled coal; soft as talc.

Strong as a wooden prop; vulnerable as an apprentice.

Stoical as a pit pony; mysterious as hidden gas.

Her crows’ feet are not white estuaries in black lands.

No speck of coal dust on her.

But I know it stains her soul.

I paint her as I see her. Her hands never still.

She creates the tapestry we live within.

She is my place of safety. My rock.

The Agbrigg Writers began life as a local education authority adult education class in Wakefield. Almost ten years ago now though they set themselves up as an independent writing group based at the Agbrigg Community Centre.

Independence has allowed the group to be more flexible in approach. Developing writing skills remains their chief aim but they have also branched into publications, reading for Wakefield Talking Books for the Blind and developing a Shared Reading Resource for people living with dementia. The above picture was taken after their successful reading performance in Seacroft during Chapel FM’s Writing on Air Festival.

Under normal circumstances, the group meets weekly on a Thursday at one o’clock at Agbrigg Community Centre. They spend a couple of hours following prompts and suggestions under the tutelage of John Clarke who quickly learned after his appointment that the two o’clock tea-break is sacrosanct.

Equally important is the opportunity for all members to share work in progress and to offer mutual support. This support is the unique selling point of the group; individually members are driven towards improvement but collectively they know that egos should be left at the door.

Any poet or prose writer who thinks that they would benefit from being in such a group should check out the website for more information.