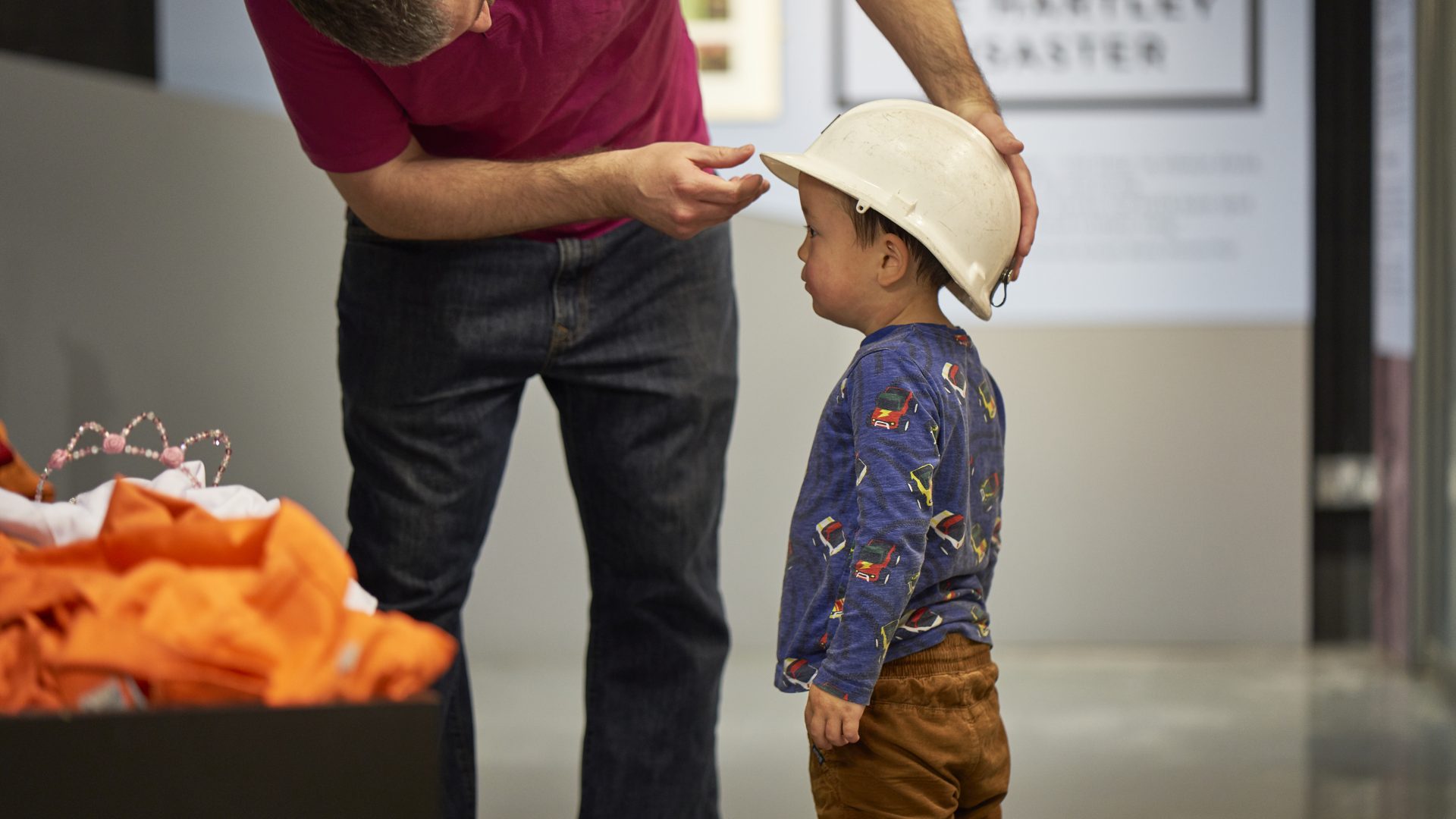 We go deep. We spark coal to life. We raise the lamp. We pass on the flame.

The pick and the lamp have long been proud symbols of coal mining but they also represent what we, as a museum, stand for.

We are the National Coal Mining Museum for England. We go deep and coal runs deep in us and in everything we do.

We go deep into the heart of what coal mining means to us and this nation. We scratch beneath the surface, we pick at the life beneath, we unearth the history and the pride. We spark coal to life. We raise a lamp to the stories, the culture, the values. We illuminate the past and we light the future of our connection with coal, mining and its rich heritage. We are the guardians of the deep, the custodians of the coal, we are the keepers of the stories and the treasurers of the memories. We will pass them on.

We are the gateway to our nation’s relationship with the earth, with the lumps of black rock that glow, heat, power. We fuel the passion felt for an honest livelihood and we kindle the flame of pride, honest graft, community, loyalty and strength.

We delve deep in the earth, deep in the memories, deep into what it really means to mine – the hard times and the good, the tragedies and the victories. From dinosaurs to the Industrial Revolution, impassioned strikes to closures and looking to a greener future.

We love to get our hands dirty in the past and we hold them up to the future generations, encouraging them to roll the history around in their hands too.

What do we leave you with? Your own desire to go deeper. A desire to return. A desire to pass the story on. An understanding that goes deeper than just the facts and the artefacts.

We go deep in the land. Deep in the heart. Deep in our identity as a nation. We will raise the lamp and pass the flame so the story is never extinguished. We will keep the fire burning. The light will never go out.

The Museum is overseen by a Board of Trustees, who are responsible for the strategic direction of the Museum. Its members have experience and knowledge in areas that are able to support the Museum.

The National Coal Mining Museum for England aims to keep coal mining alive by collecting and preserving the industry’s rich heritage, creating enjoyable and inspiring ways to learn for people of all ages, backgrounds and abilities.

To advance the education of the public in the history of mining in England by the provision and maintenance of a museum both underground and on the surface at the former Caphouse Colliery for the demonstration of past and contemporary mining methods and the exhibition of machinery and other items connected with mining and industrial archaeology.

The National Coal Mining Museum for England is located at Caphouse Colliery, on the western edge of the Yorkshire coalfield, where mining has been carried out for centuries.

A plan dated 1791 showing workings from 1789 to 1795, includes a shaft on the Caphouse site. It is probably the oldest coal-mine shaft still in everyday use in Britain today.

Before 1827 the colliery was owned by the Milnes family, but then passed into the ownership of the Lister Kaye family, until 1917.

After 1917 the colliery was run by a company, which included the ex-manager Percy Greaves, a colliery owner in his own right. Around 1941 Arthur Sykes of Lockwood and Elliott bought the colliery and remained as owner until Nationalisation in 1947. By 1985 the coal at Caphouse was exhausted and its conversion to a museum began.

In 1988 the Yorkshire Mining Museum opened at Caphouse with funding from West Yorkshire and South Yorkshire Metropolitan County Councils, Wakefield and Kirklees Metropolitan District Councils and technical support and assistance from British Coal.

The Museum was granted national status in 1995. Following this the Department for Culture, Media and Sport carried out a detailed study into the Museum, and in 1998 provided funding which secured its long-term future. In 2001 the Museum received a Heritage Lottery Fund Grant of just over £4.5 million. The Museum raised just under £2 million to complement this grant. Work carried out using this money included restoring buildings, new gallery areas and the store for large machinery. In 2002 admission to the Museum became free.

How Are We Funded?

Admission to the Museum is FREE.

As a National Museum, the National Coal Mining Museum for England gets its core funding from the Department of Culture, Media and Sport, channelled through the Science Museum Group.

The Museum is a registered charity (no.517325). The generous support of our visitors and supporters is critical for the Museum’s ongoing success. Around 20% of our income derives from visitor and donor related activity – including the £5 suggested donation for underground tours, the money spent in our retail and catering outlets, and other income arising from events, education and site donations. The Museum is proud to say that close to 90 pence in every pound generated is spent on core charitable activities.

The Museum also works with a wide range of trusts, grant-making bodies and foundations. They provide hugely valued support to help us with major projects and site improvements, alongside funding specific projects to help keep the memories of coal mining alive. We also partner with the Coal Authority for ongoing work to manage the physical legacy of Coal Mining at our site, most notably around water management.

In 2001, thanks to a Heritage Lottery Fund grant of just over £4.5 million and partnership funding of almost £2 million, the Museum was able to restore some of its buildings, create new galleries and build a store for large machinery, now the Power House. In 2002, admission to the Museum became free.  In 2003, the Museum was awarded a further grant of £985,000 from the Heritage Lottery Fund, which together with funding from Coal Authority and £1 million from the EU LIFE Environment Programme, enabled the conservation and interpretation of the buildings at Hope Pit, and the installation of a state-of-the-art, environmentally-sound, mine water treatment scheme. The newly-developed Hope Pit area of the site was opened in May 2005 by Johnny Ball.

In 2008, the Museum was awarded a grant of just under £2 million from the Heritage Lottery Fund for the Making Sense of Mining project, which conserved the historic furnace shaft and extended and revitalised the much-loved underground tour.  This project was also generously supported by grants from the Charles Hayward Foundation, the DCMS/Wolfson Museums & Galleries Improvement Fund, the Garfield Weston Foundation, the 29th May 1961 Charitable Trust, Kirkburton Parish Council, a legacy donation, and a public Buy a Brick campaign. The new developments were opened by HRH the Princess Royal in July 2013.

In 2015, the Museum’s Miners’ Memorial Garden was opened officially. With funding from Arts Council England, SITA, the Duke of Devonshire’s Charitable Trust and the Joicey Trust, together with public donations, the Garden celebrates and commemorates the courage and camaraderie of miners and coal mining communities.

In 2018, the Museum was awarded £616,800 from the Heritage Lottery Fund for its four-year Coalfield Conversations project.  This project is bringing to life the surface of the Museum site, with a regular aboveground programme of activities, a new welcome Hub, improved zoning and wayfaring, and new digital content.  Two Visitor Engagement Coordinator roles are funded by the project, aiming to grow, train and support our volunteer team, and enhance the overall visitor experience.

2020 saw the opening of a new permanent exhibition in the Technology Gallery.  Funded by AIM Biffa Award’s History Makers scheme, ‘A Light in the Darkness’  explores the contribution that Sir Humphry Davy and others made towards the development of a safe lamp for miners to use underground in flammable atmospheres.  The lamp has been credited with saving countless lives, and has become an icon of the mining industry.

The new Pony Discovery Centre opened in 2021, part-funded by the European Agricultural Fund for Rural Development, via the East Peak Innovation Partnership (EPIP).  The Centre is home to the Museum’s Clydesdale horse and ponies, and explains the important role that horses and ponies played in the coal mining industry, both above and below ground.

For more information on our financial performance and governance, please see our latest annual report